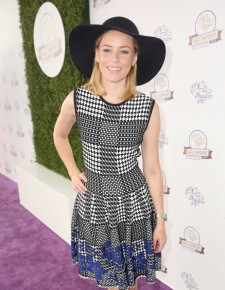 When the gates swung open for the start of the high stakes $5 million Breeders’ Cup Classic on the 1st November at Santa Anita Park in California, a dodgem car style collision set the tone for a testy finish. Bayern, bolted out of the gate, took a hard turn and careened into the favourite, Shared Belief. On the home stretch Bayern bolted to victory. Jockey Mike Smith, who rode Shared Belief, lamented that the bump had cost him the race.

The Breeders’ Cup World Championships is an annual series of thoroughbred horse races run at different locations around the United States and Canada. This year it was run in Santa Anita, nearby Los Angeles. In all thirteen races a total of $24.5 million is awarded over the two days.

The bump in the main race may have held all the controversy but jockey Rosie Napravnik, the second woman to ever win a Breeders Cup race by bringing her filly Untapable to a two million dollar triumph, had a bump of her own. She rode to the win while 7 weeks pregnant. Napravnik beamed as she burst out to announce it to the world atop the podium, explaining her upcoming hiatus. Her mother Cindy Napravnik was completely caught by surprise.

With Santa Anita Park being just 30 minutes from Hollywood, the big name celebs plumped up the style stakes.

Elizabeth Banks, the belle de jour, shone in a Alexander McQueen black and white houndstooth print dress with royal blue embroidered flowers. She set off the dress with a broad brimmed felt hat by milliner to the stars, Christine Moore. Her outfit was a lovely and very appropriate match for the American Autumn season. Banks has been an avid racing fan for years.

“Breeders’ Cup weekend is marked on my calendar every year. I grew up going to the races with my Dad and my love of the sport has only grown. The racing, the fashion, the beautiful tracks and the parties…the Breeders’ Cup has it all” Banks chirps excitedly as she holds her tickets for the next race tightly in her manicured hands.

Tony award winning broadway singer and Glee actress, Kristin Chenoweth and Bon Jovi legend Richie Sambora performed for VIP racegoers as they got their bet on. 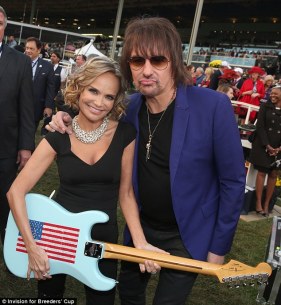 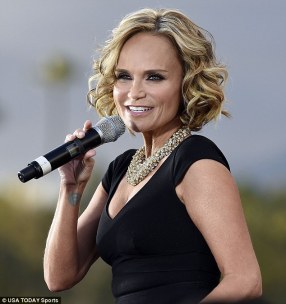 Fifty seven year old Bo Derek looked the perfect ten in a black asymetrical suit and white fedora. The birkenstock slides she donned, though currently of the moment, channelled more old lady comfortable with the socks. She should have upped the ante on the heel to complement the sharply cut suit. 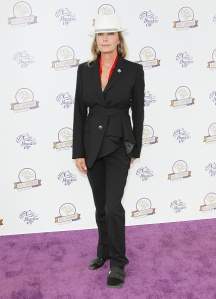 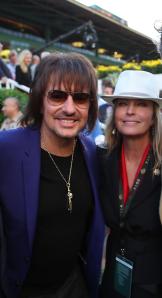 Jennifer Flavin and Sylvester Stallone wore suits of black, silver and botox. Sports Illustrated model Genevieve Morton played it safe with a two piece black dress and jacket set as did Amy Adams (who forgot to even wear a hat). 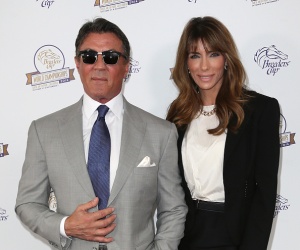 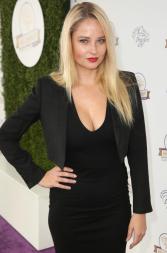 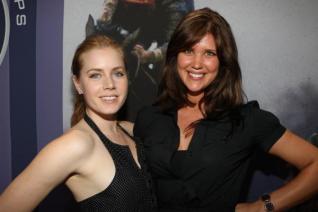 The Longines Elegance of fashion contest featured lots of conservative florals, feathers and big, big brims. Disappointingly, the laid back local Angelenos paid no heed to Autumn racing rules. Probably confused by the sunny weather, straw hats were seen near and far. The handsome Simon Baker looked dapper as he handed out the fashion prize for the day to Ashley Moreno in a rosy hightailed feather and netting creation by Arturo Designs. 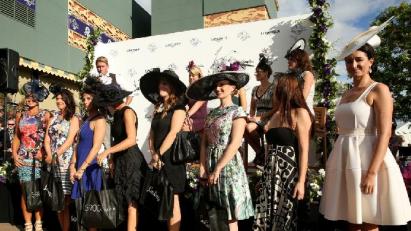 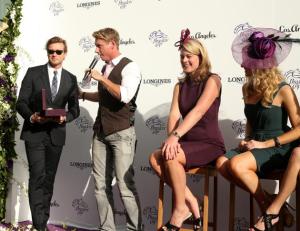 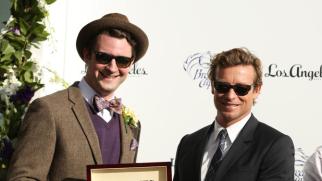 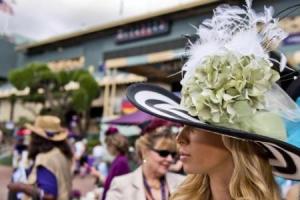 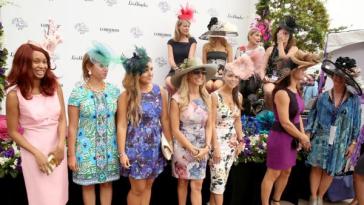